Daniel Rothman, a professor of geophysics at Massachusetts Institute of Technology, believes we may be creeping toward a calamity for Earth’s life system as a whole — the planet’s sixth mass extinction event.

The staggering amount of carbon humans are pumping into the atmosphere and the oceans may soon cross a threshold that will disorder the planet’s carbon cycle and cause a cascade of disruptions we cannot fully envision, Rothman said.

What we do know is that such disruptions in the past have coincided with a series of mass extinctions in the 540 million years since life became abundant on the planet. And while the climate crisis is usually framed in terms of years, decades, or the next century, mass extinctions play out over thousands of years.

“Every time there has been a major event in the history of life, there has also been a major perturbation of the environment. These things tend to come together,” he said.

These disruptions are associated with the carbon cycle, or the exchange of carbon in the environment, “and we know that by traces that are left in the carbon chemistry of old rocks.”

“The average person doesn’t really think about such long time scales, of course they don’t, but that’s also geology’s gift to the world,” Rothman said.

There have been many disruptions to the carbon cycle in the past that were significant for the climate but did not result in mass extinctions, however. Rothman, from MIT’s Department of Earth, Atmospheric and Planetary Sciences, investigated what made the difference, or put another way, “Why were mass extinctions special?”

Carbon is a crucial element in biological compounds, and a major component in many minerals. It enters the atmosphere as carbon dioxide when we burn fuel.

The carbon cycle is a complex, nonlinear system that centers on a loop between photosynthesis and respiration. As part of the cycle, the element is exchanged between the atmosphere and the upper levels of the ocean. Too much carbon can outpace the ocean’s “damping mechanisms” and overwhelm the cycle, leading to a cascade of positive feedback that disrupts the entire system. The perturbation can take thousands of years to even out. 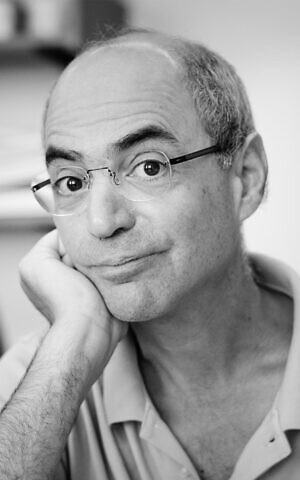 Daniel Rothman, professor of Geophysics and co-director of the Lorenz Center at MIT. (Courtesy/John M. Hayes)

Too much carbon in the ocean renders it more acidic, and inhospitable to many types of life. Four of the five past mass extinction events appear to be associated with an increased rate of carbon cycle change, and “it looks as if there’s a special rate of change which is acting as a threshold.”

We are adding carbon to the atmosphere much faster than past geologic events, on a shorter time scale.

Rothman calculated that the critical threshold for carbon in the ocean is around 300 gigatons in a century, and we’re on track to add up to 500 gigatons by 2100. 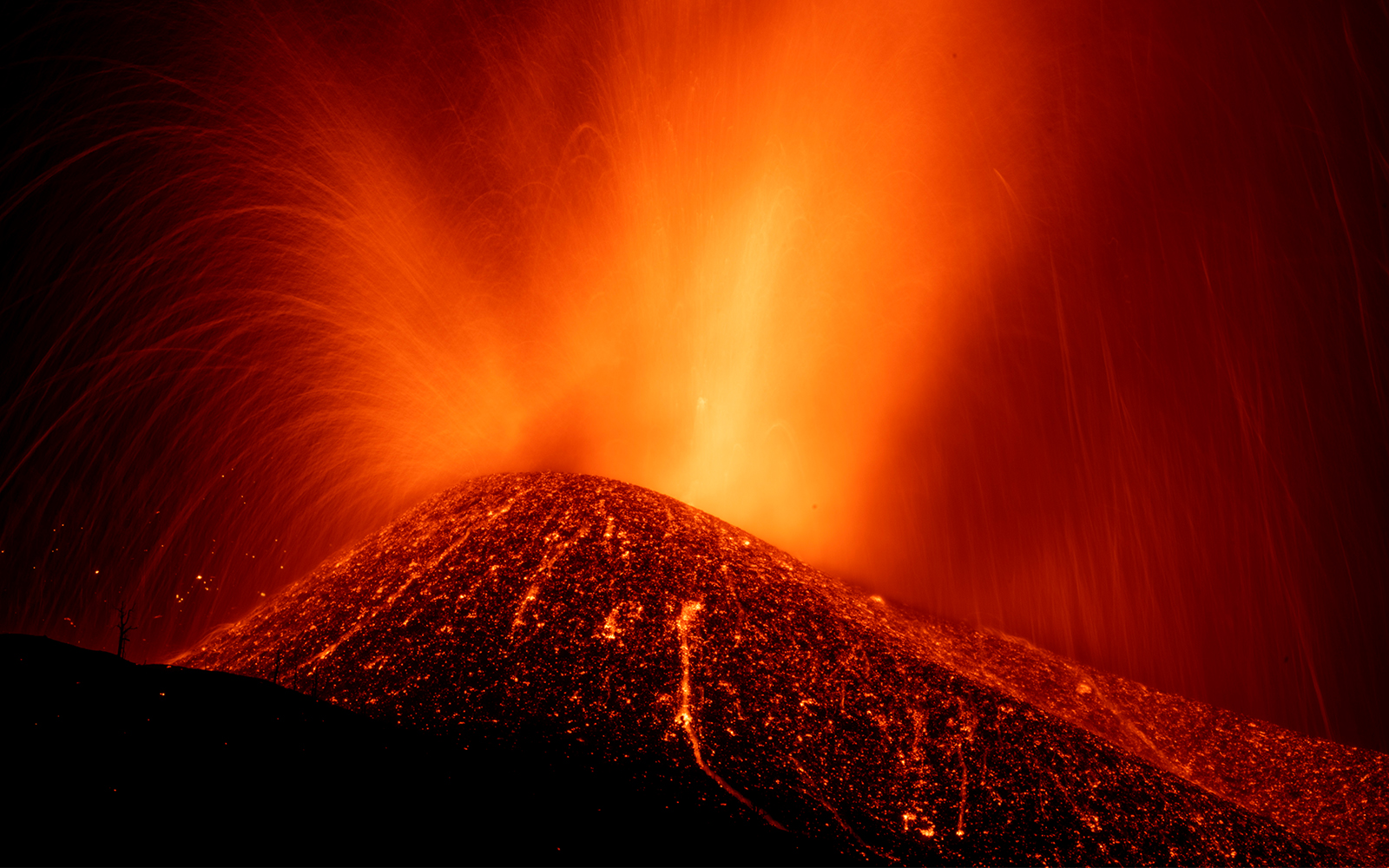 Lava from a volcano eruption flows on the island of La Palma in the Canaries, Spain, on September 23, 2021. (AP/Emilio Morenatti)

Most mass extinctions do not come about with an asteroid impact and a burst of light, but take place over eons.

To the best of our knowledge, the planet’s most severe mass extinction event, the end-Permian extinction, took place around 252 million years ago.

It coincided with massive volcanism in the Siberian Traps, a vast region that burst with eruptions and spewed magma for some two million years, pumping chemicals, including carbon dioxide, into the atmosphere. Some 3 million square miles of basaltic rock carpeted today’s Russia as a result.

The volcanic event, one of the largest known, is believed to have spiked ocean temperatures and increased acidification, triggering a collapse in global ecosystems.

The end-Permian extinction event killed off over 96 percent of marine species and over 70% of terrestrial species, according to a 2018 MIT report.

It began abruptly and took place over as much as 60,000 years, researchers said — a blink of an eye in geologic time.

The K-T extinction event that wiped out the dinosaurs and three quarters of plant and animal life on earth 66 million years ago was the earth’s most recent mass extinction event. It was likely tied to an asteroid impact, but also coincided with tens of thousands of years of massive volcanism in the Deccan Traps in today’s India. 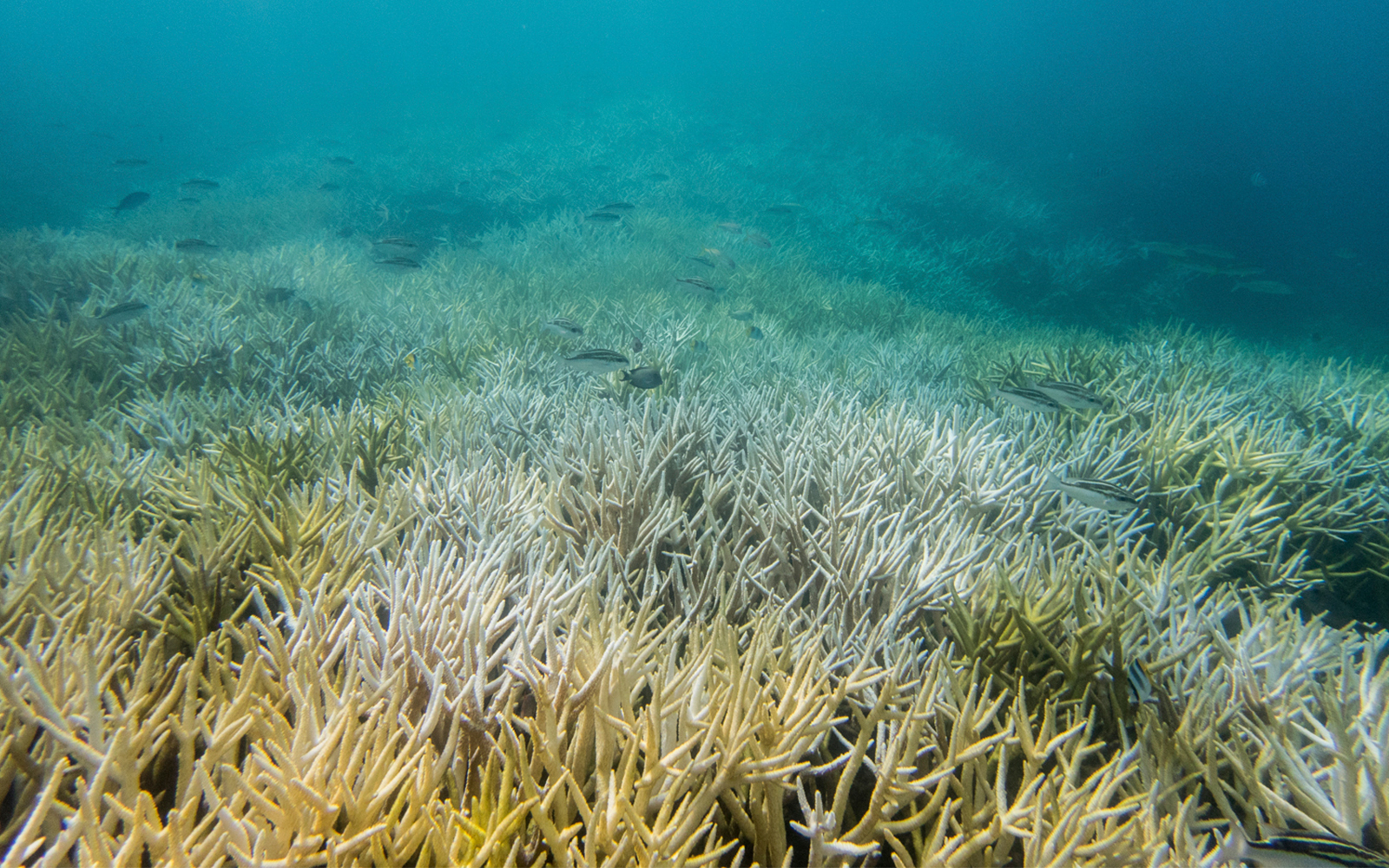 Bleached coral in Guam in 2017. A study released in 2018 that severe bleaching outbreaks are hitting coral reefs four times more often they used to a few decades earlier. (David Burdick/NOAA via AP)

The deep past is murky, the records incomplete, and little is known with absolute certainty. Moreover, extinctions take place on a continuum, with species dying out even when systems are stable.

Paleontologists, scientists who study the history of life on earth, distinguish between “kill mechanisms” and other factors in extinctions. For example, carbon dioxide in the atmosphere may not have killed species directly, but may have triggered ocean acidification, which could have in turn annihilated marine species.

Rothman said that during times of environmental stress, we have a record of carbon cycle behavior, and there is a clear association between carbon cycle change and mass extinction, but many other factors likely play a part.

He compares mass extinctions to the 2008 financial crash.

“You can blame mortgages but it’s a whole set of things. Once there’s a modest instigation, the whole thing goes crazy and it basically becomes unstable and you have this recession, so it’s catastrophic change,” he said. “To point your finger at any one thing, you might have been able to identify some kind of proximate cause, but identifying what the real cause is, the way things interact with each other, is a different game.”

“There are what we call tipping points, or positive feedbacks in the system, and we don’t really understand them,” he said. “This is really at the vanguard of scientific research in this area.”

For example, many marine animals form shells and skeletons using carbon, and are coated with algae made with organic carbon. When they die, the shells weigh the organisms down and bring the bodies to the seafloor where they are buried by sediments, sequestering the element and removing it from the upper ocean. Ocean acidification impedes organisms from forming shells, further driving up the amount of carbon in the upper ocean.

The research is part of a global effort. Rothman does not study fossils or carry out digs, but does calculations based on other research. The most clear fossil record is in China. Researchers there can date extinctions in the fossil record, and match those dates with evidence of massive volcanism and the carbon chemistry of rocks in other areas.

Mass extinctions leave both a marine record and a terrestrial record, but he and other researchers focus on the marine record because the data is clearer. The marine geochemical records in sedimentary rocks, and the fossil record, are more straightforward to interpret. A fossil found on land might be indicative of a specific environment, but the oceans are well-mixed, and a find is more likely to be indicative of the global environment. 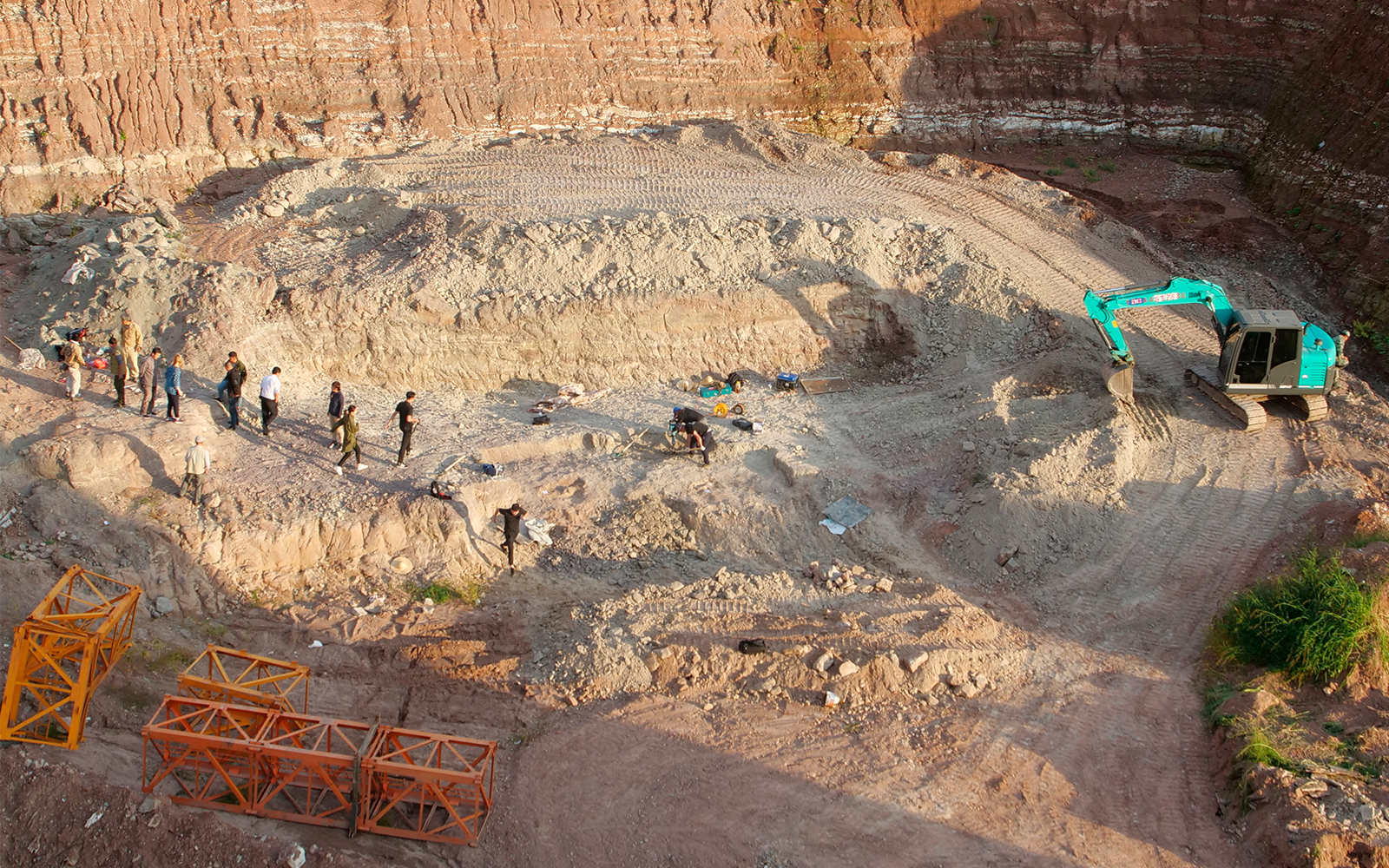 There is a debate over whether we have already entered a mass extinction event, caused by us — the Holocene extinction. The rate of die-offs is already far higher than the natural extinction rate.

Rothman said current research, which involves counting fossils and current die-offs, is factual and connected to his research but outside of his realm. Many of the current extinctions are due to land use, for example, and it’s hard for him to conclusively say we have crossed the Rubicon into a mass extinction grade event.

He began his research into the area five or six years ago partially to address that question.

“Mass extinctions represent some type of cascade of positive feedbacks that cause a global ecosystem crash. What we’re seeing today is very serious; however, I don’t know how much is necessary to move us to the tipping point that would create a global catastrophe for the global ecosystem,” he said. “I can’t say we haven’t, I just don’t know how to say when we would.” 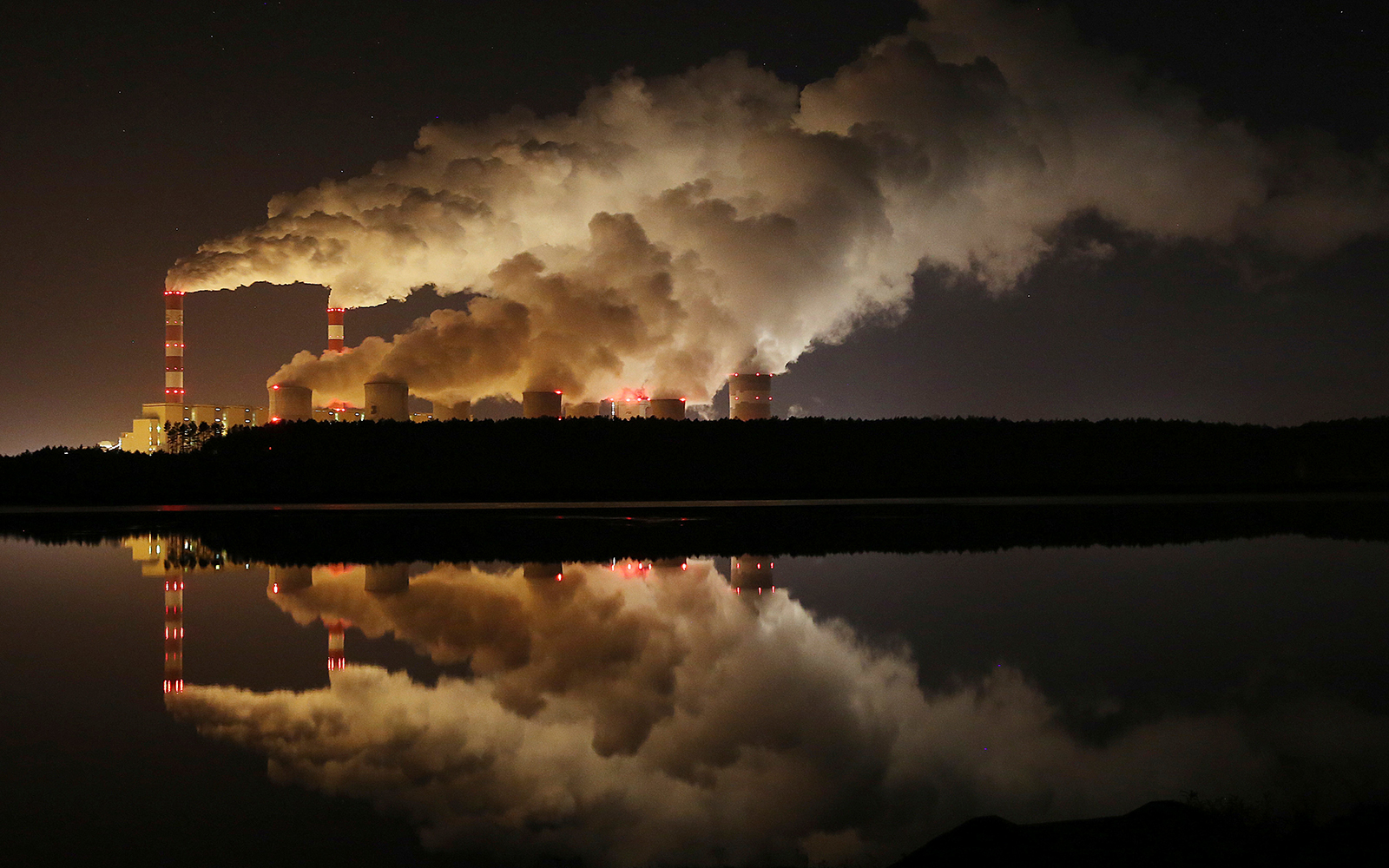 Some species have gone extinct because of human greed and cruelty, others by negligence, some die off despite our best efforts, and the vast majority disappear before we know of their existence. We still don’t understand the ramifications of extinctions, or the destruction we wreak on the environment.

The effort to understand climate change, extinctions, and what causes them is part of a “continuing scientific effort to understand how our world came to be, what happened on the way to the present point. A large number of people around the world are trying to figure out the history of the environment and the history of life and what it might mean,” Rothman said. The endeavor will help us understand the dangers of modern climate change.

Events like the COP26 climate conference are a step in the right direction, but reaching political agreements and getting people to cooperate is still far outside our grasp.

“It’s, I think, frankly a more difficult problem than the sort of stuff I work on because I’m just trying to figure out what the truth is,” Rothman said. “One would like to see more but good people are doing their best.”

Rothman co-founded MIT’s Lorenz Center, a “curiosity-driven” advanced climate research center, to better predict and understand the most complex scientific challenge we have faced as a species.

“We need to limit the ways we pollute the environment and we need to find ways of diminishing the amount of CO₂ we put in the atmosphere. Of course we already knew that but this provides another kind of reason to do it,” he said. “There are things that could happen which essentially go beyond our ability to understand them.”

By Luke Tress | The Times of Israel

Million children could die of hunger in Afghanistan in winter, - UN