The United States has stopped shipping equipment related to the F-35 stealth fighter aircraft to Turkey, Reuters reported. This marks the first concrete step Washington has taken to block delivery of the jet to its NATO ally.

Turkey’s President Recep Tayyip Erdoğan insisted during the recent local election campaign that there was no turning back from the purchase of Russian S-400 air defence system. U.S. authorities oppose the purchase and have stated that F-35 fighter jets cannot possibly be delivered to Turkey if it goes ahead.

Turkey expects to receive the S-400 equipment in summer, and expects it to be operational before the year’s end.

Turkey’s Foreign Minister Mevlüt Çavuşoğu is set to take part in the NATO summit in Washington on Tuesday to celebrate NATO’s 70th birthday.

The news about the halt of F-35 equipment will be a new source of tension in what can already be described as a very complicated partnership between Turkey and NATO in recent times.

Turkish officials have yet to discuss the possibility of a break from NATO, though discussion of Turkey’s position in the alliance has continued for months at various international platforms, discussions and reports.

If Ankara decides to go ahead with its purchase of the Russian S-400 systems, Turkey’s status within NATO is likely to be downgraded, since it will make necessary the restriction of their participation in certain meetings, U.S. expert Steven Cook said.

Reuters reported that U.S. officials have just recently told their Turkish counterparts they will not receive further shipments of the equipment needed to prepare for the arrival of the F-35 jet. 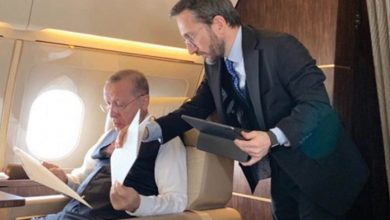