Turkey’s top court ruled on Thursday that the imprisonment of a female teacher on allegations of terror propaganda was a violation of freedom of expression and that spontaneous declarations should be more tolerated.

Late on the same day, Ayse Celik was released from the Type-E Prison in the southeastern province of Diyarbakir.

The teacher fell foul of the authorities after she called for an end to violence against children in 2016. On Thursday the Turkish Constitutional Court (AYM) ruled in accordance with Article 26 of the Constitution, in favor of Ayse Celik who called for an end to the violence in the predominantly Kurdish region of the country in a live phone-in during the Beyaz Show on January 8, 2016.

“Are you aware of what is happening in the country’s east? What is happening here [Diyarbakir province] has been differently reported on TV. Do not stay silent! Please approach [the happenings] more sensitively as human beings! See us, hear us and give us a hand! What a pity! Do not let people die. Do not let children die. Do not let mothers cry,” Celik said on the TV program.

At the time there was a military campaign against the outlawed Kurdistan Workers’ Party (PKK) initiated by the Turkish Armed Forces (TSK) in the southeastern Kurdish cities, using brutal tactics and heavy weaponry.

The clash had come after the peace process negotiations broke down between the ruling Justice and Development Party (AKP) and PKK in 2015. PKK has waged a decades-long insurgency in Turkey for self-rule since the early 1980s.

The unemployed teacher was investigated by prosecutors over her speech on the live phone call to the TV show and sentenced to 15 months in April 2017.

The Istanbul Bakirkoy 2nd High Criminal Court upheld her sentence in October 2017, finding her incarceration justified. She was sent to jail on April 20, 2018, with her six-month-old daughter.

Following her appeal, she was released from the prison and confined to house arrest by the court on May 4, 2018.

After a three-time-delay in sentencing due to having a newborn baby, the teacher was jailed again to serve her sentence on April 17, 2019.

The AYM found a violation of the freedom of expression safeguarded by Article 26 of the Constitution in the individual application lodged by Celik. The top court also ordered to pay 5,500 liras (around 900 $) compensation in non-pecuniary damages to the teacher.

In its issued reasoned decision, the AYM stated that spontaneous declarations should be more tolerated.

It is the first ruling of its kind that the AYM has ordered a violation of freedom of expression on a case with terrorist propaganda charge, claimed Benan Molu, Celik’s lawyer, on her Twitter account.

According to Mahsuni Kahraman, Celik’s other lawyer, the AYM’s ruling should set a precedent for all trials, such as cases of doctors from the Turkish Medical Association (TTB) and of Academics for Peace.

Last week, 11 doctors from the Turkish Medical Association (TTB) were sentenced to 20 months in jail due to their criticism on a government army operation in Syria’s Afrin in 2018. Currently, 600 academics who have been facing trial for signing “Academics for Peace” petition in reference to heavy clashes between security forces and PKK in 2016.

“The AYM’s ruling is a turning point in terms of court cases related with freedom of expression and thought crimes [in Turkey], as it is a precedent decision,” said Prof. Dr. Ibrahim Kaboglu.

He is a prominent constitutional jurist who was removed from his post through a decree law during a two-year emergency rule after a failed coup attempt in 2016.

The Turkish authorities have expended the practice of prosecuting normal civic activities as terrorist crimes, with prosecutors stretching the definition of terrorism beyond all recognition, according to Nate Schenkkan, Project Director at Freedom House, an independent watchdog organization dedicated to the expansion of freedom and democracy around the world. 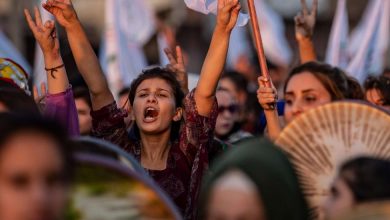 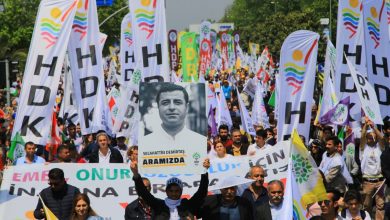